The Baltic gas supply infrastructure has been developed around the Inčukalns underground gas storage (UGS) facility as a central element of the grid. Inčukalns UGS of 2.3 bcm capacity has a role of balancing supply and demand volumes in the Baltics.

Total market consumption of the Baltic states is ~4.5 bcm. Lithuania is the largest market with ~2.6 bcm, Latvian market is ~1.5 bcm, Estonia ~0.6 bcm. Industrial gas use in fertilizer production is dominant consumer in Lithuania, while power and heat production industries are main consumption drivers in Latvia and Estonia. 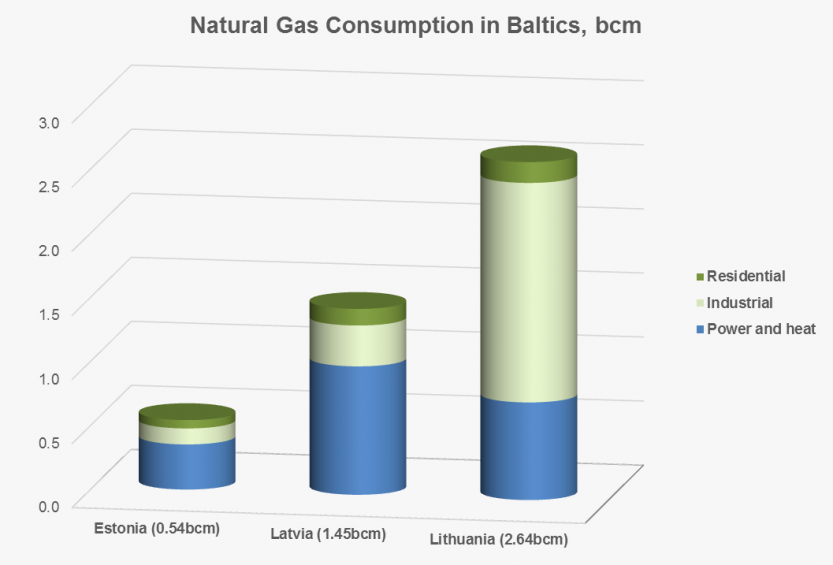 The Baltic states have been an "energy island" for a long time, connected only to the Russian gas supply system. The European Union is contributor of two gas interconnection projects, connecting Baltics with Finland and Poland.

Balticconnector connects Estonia and Finland. The pipeline was commissioned in January 2020.

GIPL (Gas Interconnector Poland - Lithuania) connects Lithuania and Poland. The pipeline was commissioned in May 2022.

The Baltic region is heavily dominated by Russian gas supplies. Alternative supply channels has been considered in recent years. Since 2014 the LNG terminal in Klaipeda has served as an alternative LNG entry point in the region. However, the need for an effective long-term alternative LNG supply channel is still required. The Skulte LNG terminal project, along with Klaipeda LNG terminal and two Estonian projects in Paldiski and Tallinn are under consideration as a long-term solution for LNG import in the region.

The gas transmission system operators (TSOs) in Finland, Latvia and Estonia have signed an Inter TSO Compensation (ITC) agreement, which enables the functioning of a single gas transmission tariff zone for Finland, Estonia and Latvia from the beginning of 2020. The ITC agreement unifies the entry point tariffs on the external borders of the region and removes commercial interconnection points between countries. The Estonian - Finnish interconnection Balticconnector is used for transportation of the gas across Finnish gulf without additional charges. Transportation of gas to and from Inčukalns UGS is also ensured without additional entry/exit fee. The ITC agreement foresees compensation for TSOs of eligible variable costs and sets principles of the entry revenue re-distribution among the operators.